Tanks and bulldozer equipment line up as neatly as a child’s play models, high on the hills of the Golan Heights. Soldiers strip under a tent, like sweaty kids getting ready for supper at the end of a normal, happy day. 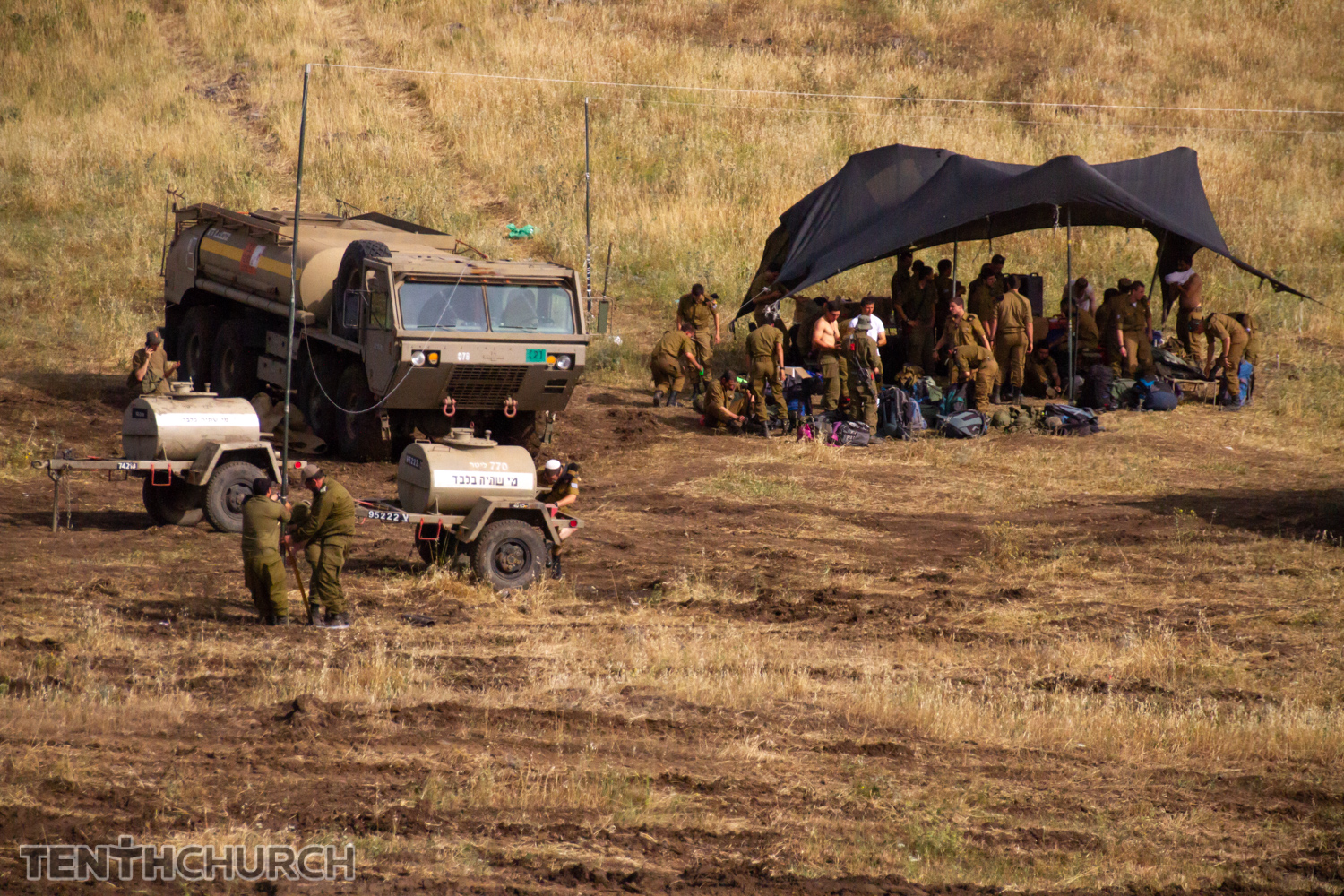 We are here at the end of our day, elated to see this highly debated borderland in action. Rocket missiles flew from Syria, and fighter jets flew back from Israel last night. We heard their supersonic booms at 3 am. In the process, 40 Irani weaponries in Syria were destroyed by this army, resulting in ease, as we drive through at sunset.

Is this what “peace on earth” looks like? Defence of borders to maintain inner quiet? In these Golan mountains I think of Psalm 121: “I lift my eyes up to the hills. Where does my help come from? My help comes from the Lord, who made heaven and earth.” 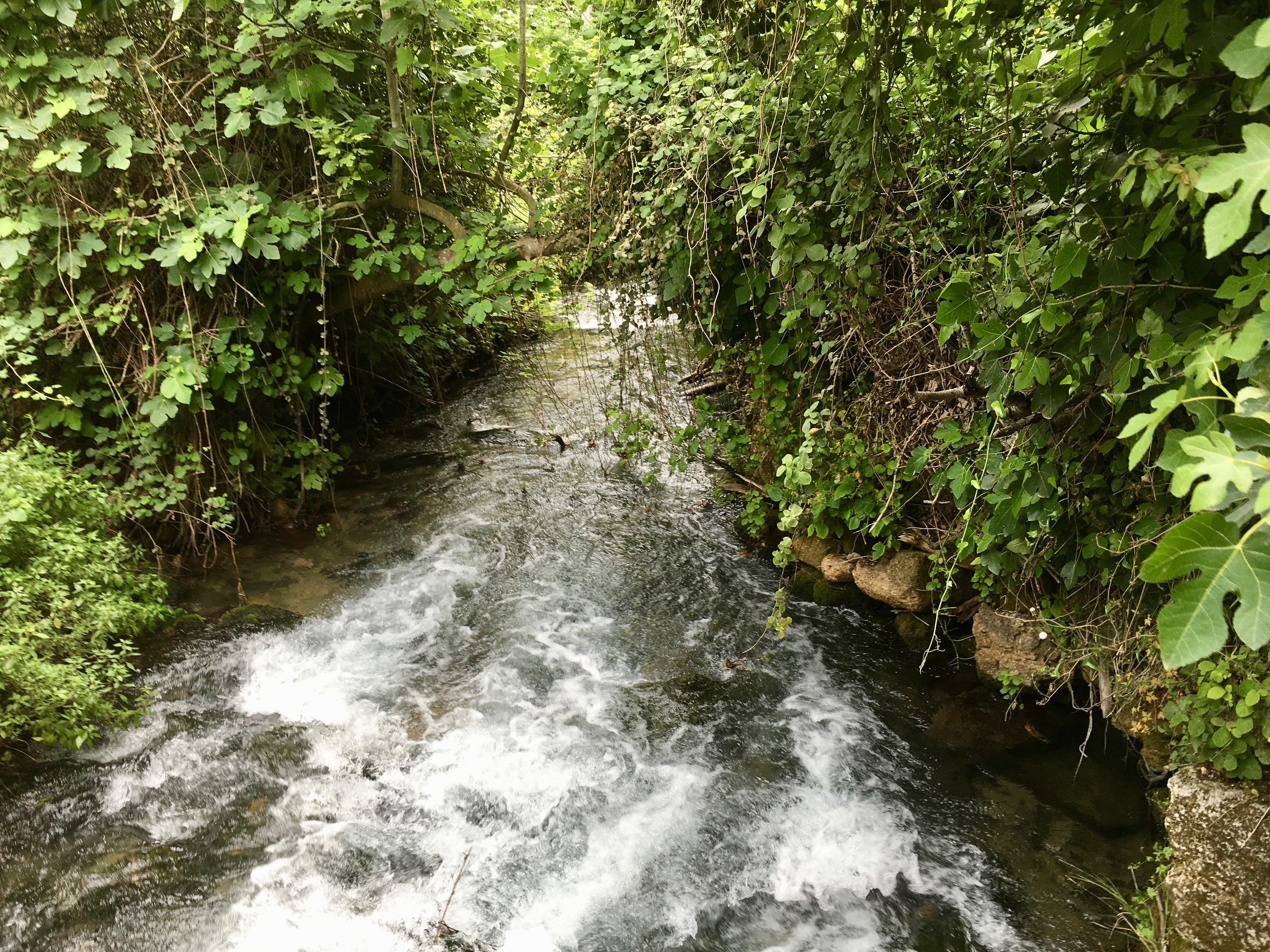 Our day had begun at Tel Dan, where the Jordan river headsprings rush and tumble. It’s a lush, leafy tangle of fig and laurel trees, ferns, and shining wet stones. We walk through them, smelling the freshness. A mini-theatre reveals itself in the forest. Gathering, we listen to the voice of creation tell God’s glory, and sing “How Great Thou Art!” Splashing streams and singing birds join the song! 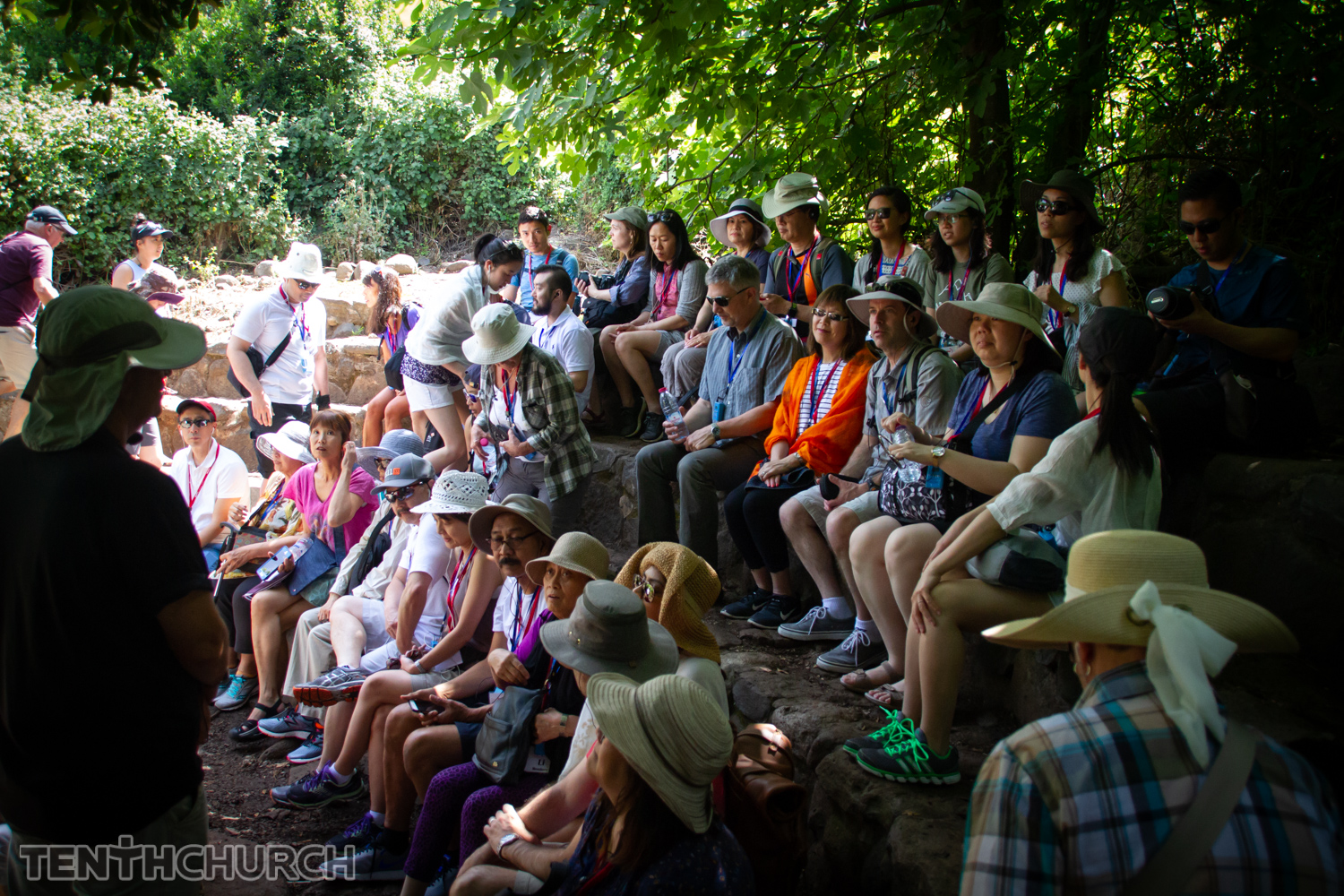 The gardener of this national park sits with us, watching in silence, listening,  while his large hands clasp his shovel. Does he know the God of Creation? For a few moments he videos us through his phone. Maybe the song will be carried like the sound of living waters into the wells of his heart.

Just beyond this beauty is Jeroboam’s Altar, where the son of Solomon decided to make a place of worship in Northern Israel. He didn’t understand pilgrimage and thought the people shouldn’t bother traveling to the temple in Jerusalem. The altar ended up as a site of ritual prostitution “under every green tree.” 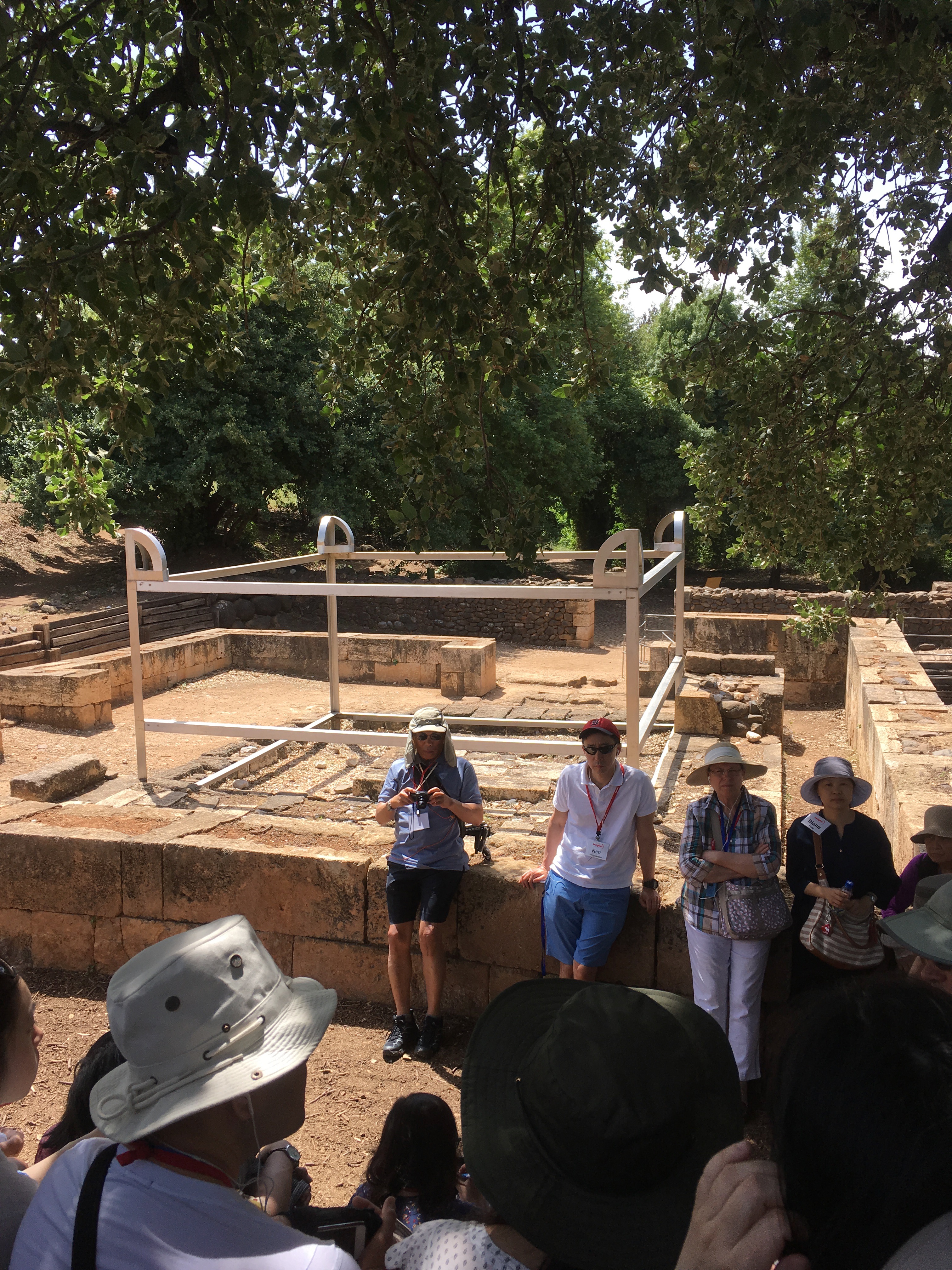 Now the altar is gone, with only an outline of where it was, but the beautiful trees remain: oak, pistachio, terebinth, growing strong and free. There’s something deeper than sin in a garden.

We stop at Banias – or Panias, named for the god Pan. It’s at the massive “gates of hell” cave, where children were sacrificed to trade blood for food. It’s where “pandemonium” and “panic” found definition. In this spot Jesus asks, “Who do you say I am?” Peter declares, “You are the Christ, Son of the Living God.” Jesus says he is right, taught by the Spirit. 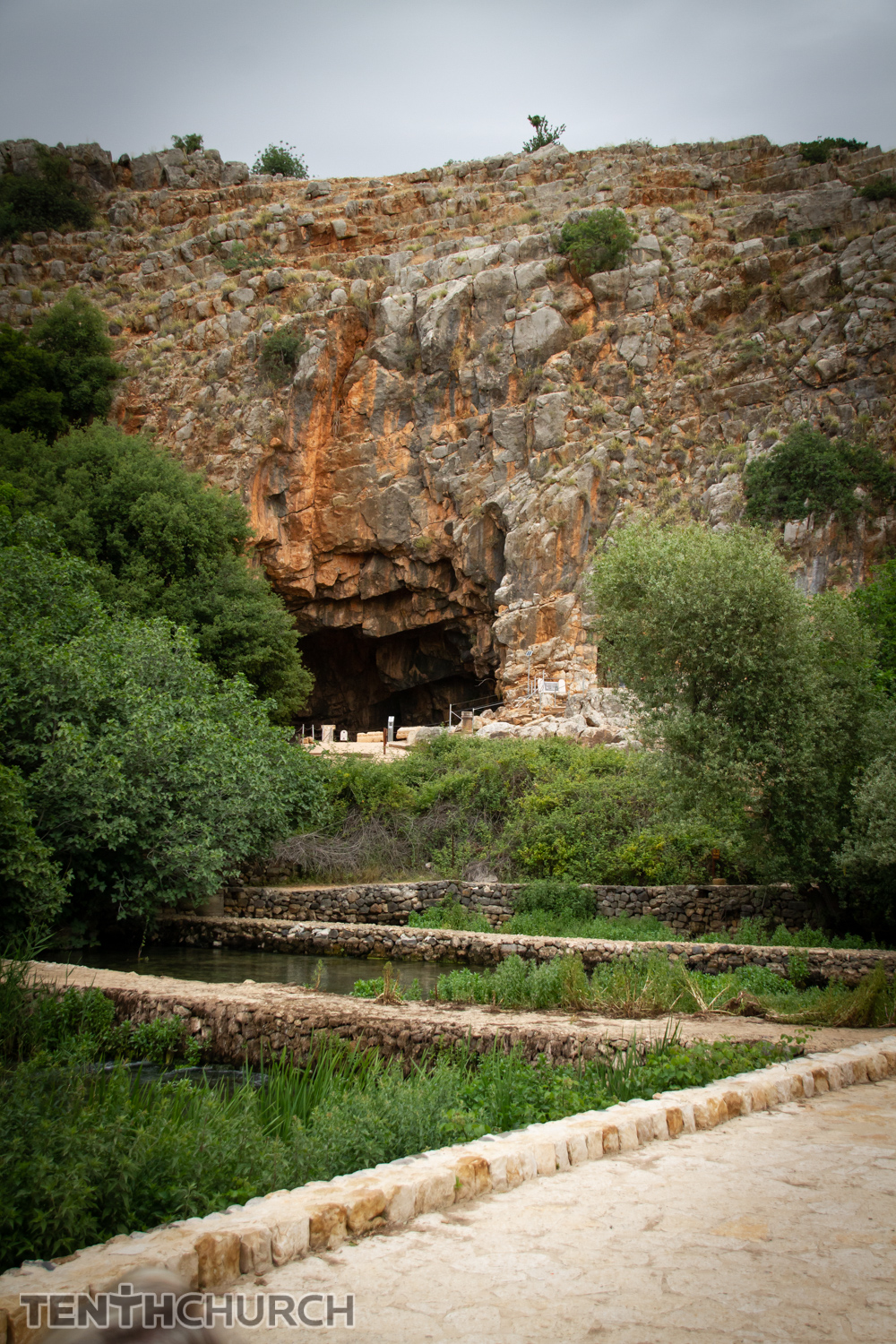 Darrell has another question: “Who do you say you are, Jesus?” Why does the Son of God most often identify himself as Son of Man? Who is this Man? 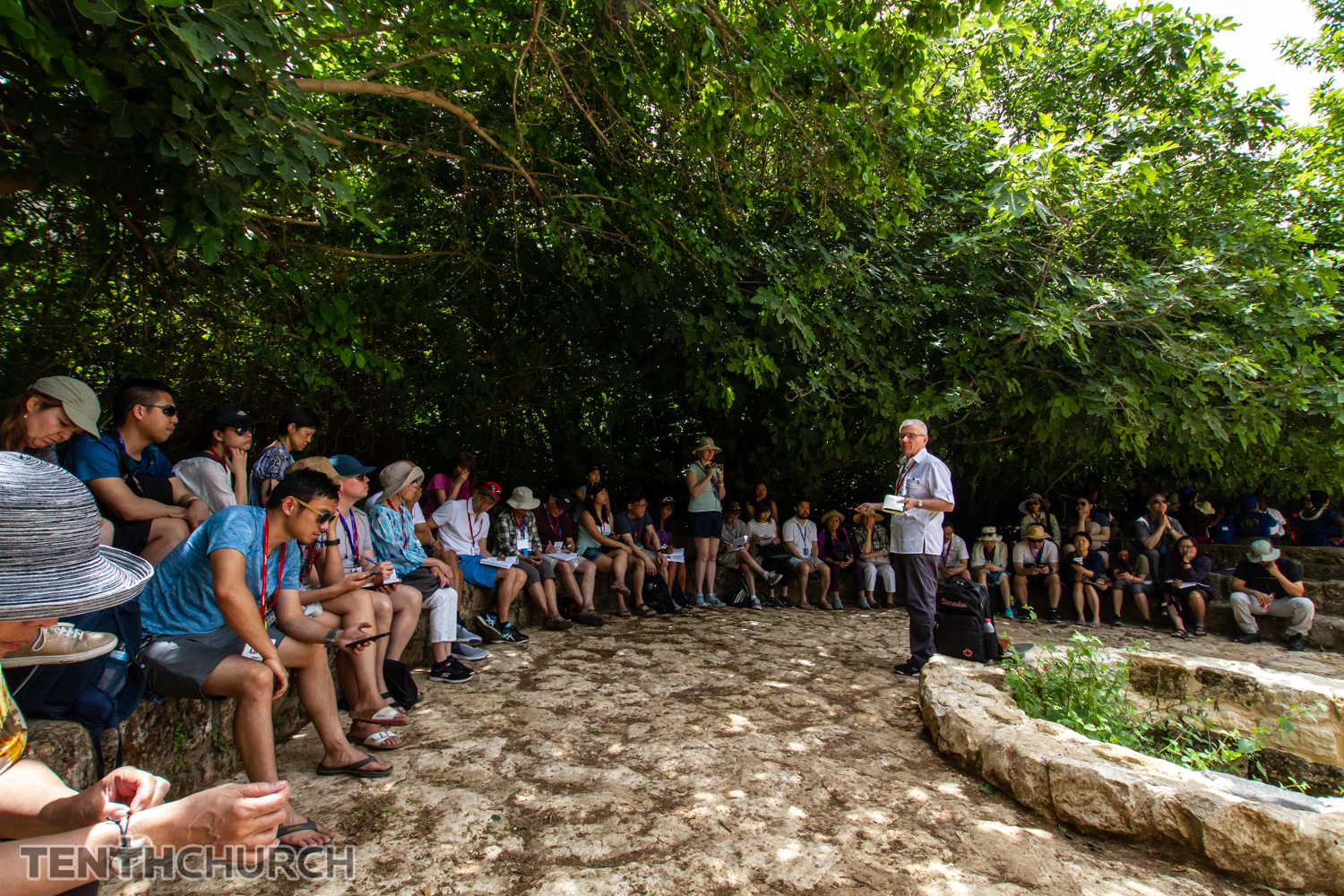 Salome’s palace right next to the “gates of hell” gives us a clue. Here, where the girl dancer got her wayward start, a Cross-shaped keystone holds up the strongest, oldest arch from that era. The arch supports a bridge that modern trucks can still rumble over, 2000 years later. Ages of war and wickedness have not destroyed it.

Is the Son of Man on the cross, a bridge for all ages, holding up the weight of all life? 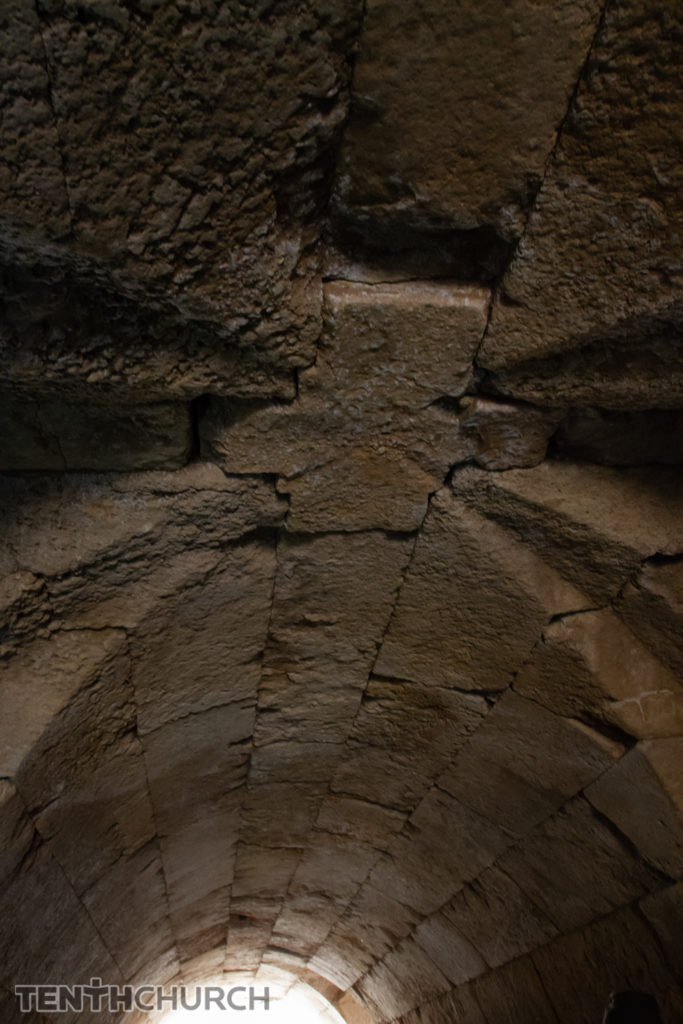 Two famous men met God on the Road to Damascus: the father of faith and the founder of the western church. Abraham’s Gate is the most ancient excavation here. Here Abraham left Lot and followed the path less travelled.

Here Saul saw the light from heaven and also took a less travelled path. We now walk that path, gathering mustard seeds, praying our tiny faith will grow and spread like them.

A treat is in store. Stretching our itinerary, we ascend Mount Hermon and hear how Jesus was transfigured with the light of God. Moses shone on Mount Sinai when the first written covenant was given to humanity. Now Jesus, the Word made flesh, is illuminated as God’s new covenant.

On Mount Hermon is Nimrod’s Fortress, replete with pointed arches and massive stonework. It was set as a Crusader watchtower over the well-travelled Damascus trade route, 10 centuries after Paul saw light from heaven on that road.

In its cavernous halls, pierced with light shafts, like the piercings of Christ, we hear Mary’s Magnificat slipping from the flute through the cracks and joins of every huge hewn stone. It’s a mother’s song of joy for a Son who would defend righteousness and rest. From the beating heart of the fortress we hear the Crusaders’ spirit at its best. 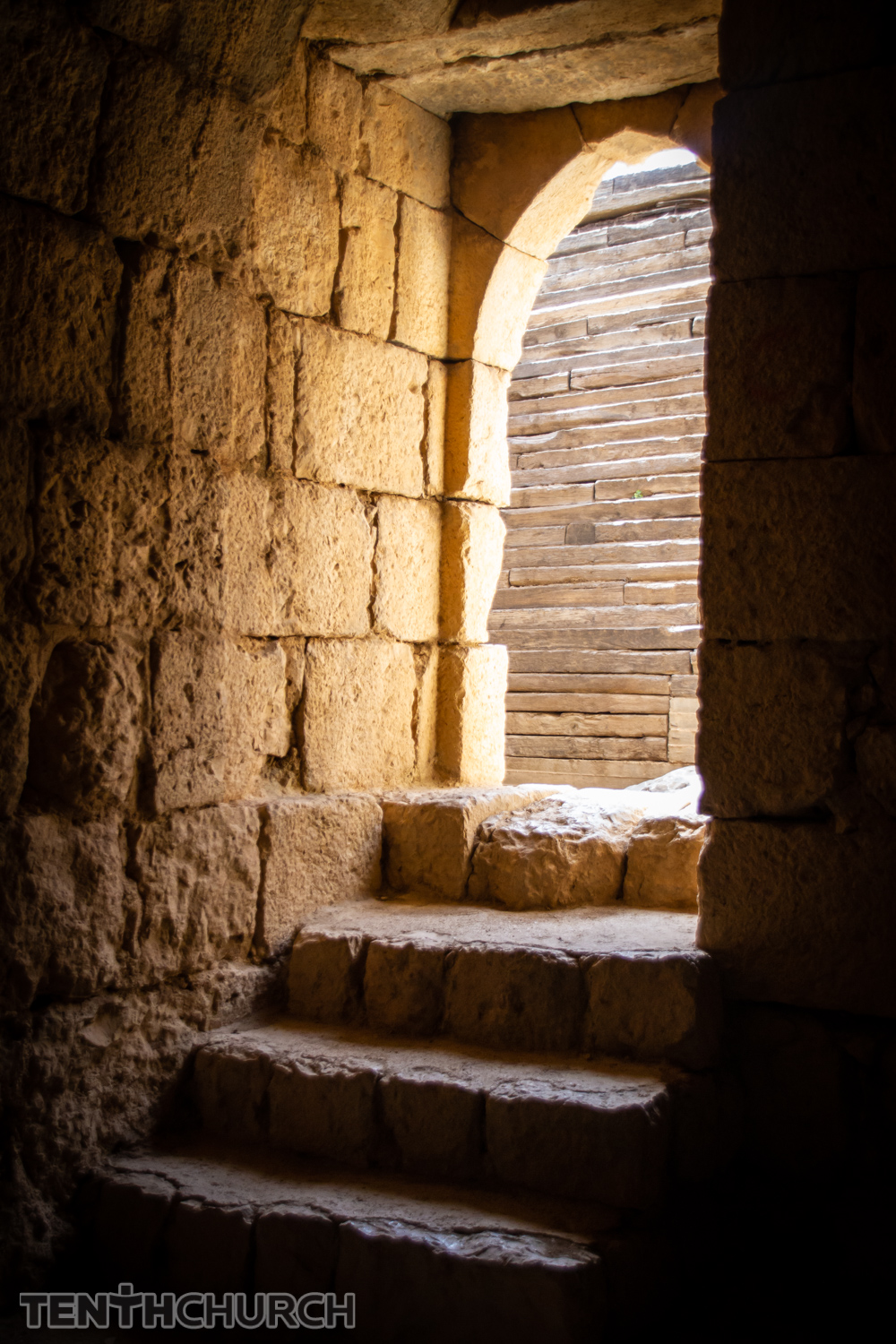 And so, when we see the Israeli Defence Force tanks lined up, having done their day’s duty, we have a sense of completion. Another day of hope has survived in this land of complicated roads, of bridges and gates.

We start to understand who the Son of Man is, reflected in all humanity – a soldier, gardener, leader, crusader and pilgrim – and who we are to be, as His followers.

3 thoughts on “Who you’ll meet on the journey”