Anne, we will go to the Church of St. Anne, mother of Mary (grandmother of Jesus.) It’s at the foot of the Mount of Olives, right beside the Pool of Bethesda, where Jesus healed the paralyzed person. It’s a church from Crusader days, set in a lovely garden. Every year, the Palm Sunday procession ends there, with 10,000 people entering its gates, singing! 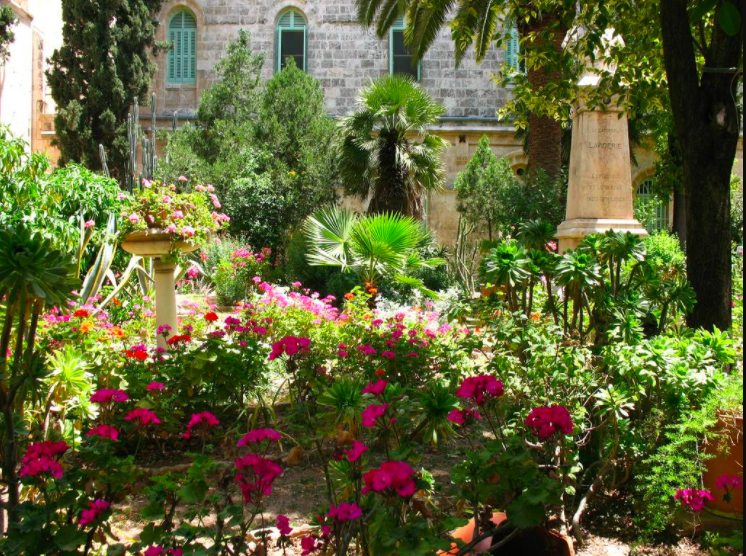 Inside the church, all is calm, cool and quiet, with a still light that stretches to the skies. (It’s kind of like you are, inside!) Into the stillness we sing, and the acoustics, perfectly maximized by the architectural design, multiply the sound until it resounds like the angels of Bethlehem on the night when Anne’s daughter, Mary, gave birth to a son, the Son of God.

I like to think that just after Jesus experienced the triumph and tragedy of Palm Sunday, with its loud Hosannas and his tears wept over Jerusalem, he entered his grandma’s home. A sanctuary in the storm. Where he’d played as a child and now went for milk and cookies one more time before facing Herod and Pilate, Caiaphas and all the people.

It’s interesting: the opposition was from every level of community: Jewish government, Roman government, religious leadership, ordinary souls. Everyone turned against him, even his best friends in the end. So where might he have gone, right before that played out? To the garden of St. Anne – who was only named a saint once it was clear that her grandson truly was the Son of God. Only after she’d watched her daughter suffer through witnessing his death. After the resurrection, and ascension.

Do we think Jesus had breakfast with Grandmother Anne after he rose again, as much as with Peter on the seashore, where he asked Peter, “Do you love me?”?  We can expect he did. Only, at breakfast with her, he never had to ask the question. Anne loved him! It was always clear! As clear as the echoing acoustics of her quiet, steadfast church where, most often, the tune “Amazing Grace” rings out. Maybe in her home, that first Palm Sunday, grace his fears relieved.

He took that grace to the cross a week later. And not only was he resurrected, but he made a way to raise forever the paralyzed man who’d lain by the waters waiting for an angel outside his grandmother’s home. He made a way to raise forever his grandma, whose name stands over the door of the Crusader church: St. Anne. Where we will sing “Amazing Grace” and think of you!

After all, “Anne” means grace. You and she are well named! One day, by grace, all of us will meet in the beautiful garden of God where angels sing, and Jesus walks, and will welcome us home!

Blessings as you stay, and thanks for your prayers as we go.

1 thought on “What I wrote to Anne, who isn’t coming to the Holy Land”